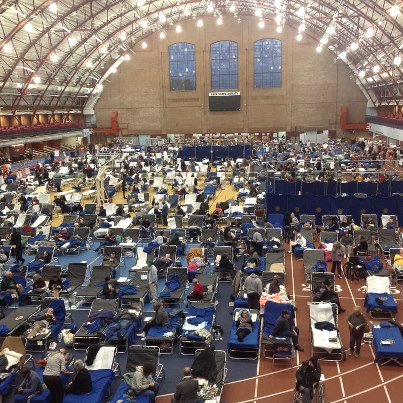 Following Hurricane Sandy, the residents of Bell Harbor Manor, a 162- patient assisted-living facility that was decimated by flooding and subsequent looting that occurred in the neighborhood of Far Rockaway, Queens, became refugees, unable to return home. They were moved into a temporary shelter at the Park Slope Armory where their care, primarily from volunteers supporting the American Red Cross, DMAT, the Department of Health and AmeriCorps and facilitated by Brooklyn Councilman Brad Lander, aided their most immediate needs. In addition to scores of civilian volunteers converging on the Armory, which made an enormously positive and imperative impact on the then-500 evacuees and required logistical volunteers to create a volunteer sign up infrastructure to streamline efforts, wellness programs were initiated and included showing movies, musicians coming in for concerts and sing-alongs, writing workshops, arts and crafts, and service animals. The benefits of these efforts – in addition to seeing the friendly faces of volunteers who established relationships with evacuees – considerably eased the trauma of Sandy’s immediate aftermath. Three weeks after the storm and sleeping in a general population on cots in rows of 20 at the Armory, Belle Harbor Manor Residents were then moved to temporary housing at the Kings Hotel in East New York, a facility that was not designed to accommodate this type of resident where they still reside on cots, four residents to a room, and do not have bars on bathtubs, mirrors in bathrooms, closets or dressers to store black garbage bags full of donated clothing they obtained at the Armory (which is now all they possess), and only one elevator to shuttle nearly 200 residents among four floors, many of whom rely on wheelchairs and walkers. 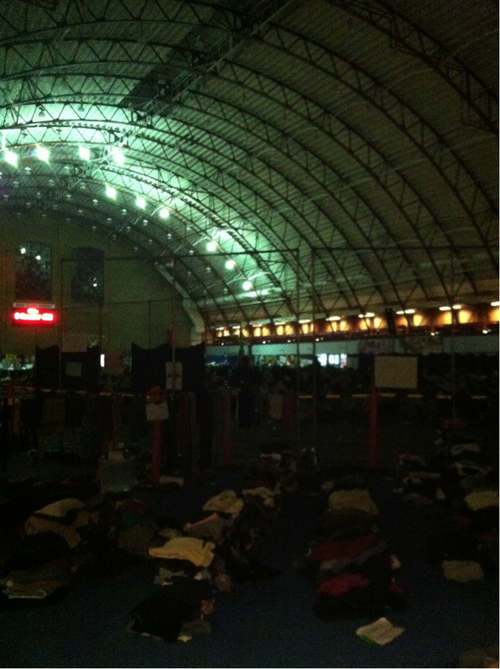 Clothing donation center at the Armory where I spent overnights for three weeks.

These senior evacuees, all of whom have special medical or mental health needs, escaped in the dark of night during Hurricane Sandy without their wallets, pocketbooks, mobile phones, or any way to communicate with loved ones and care for basic needs on their own. In the first few weeks, they had been surviving through donations of essential items at the Armory and the kindness of strangers. In time, CenterLight Health System, one of the largest comprehensive, not-for-profit healthcare organizations in the country, began managing care of the residents – in addition to the City of New York’s Department of Health – and provided an immense amount of logistical support, not only for the evacuee residents but also for the volunteers who wanted to stay connected throughout their transition out of the Armory and into Kings Hotel. 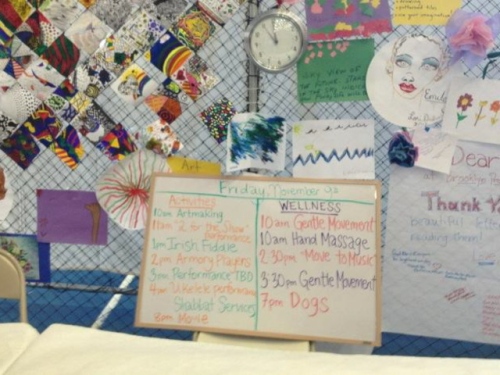 Wellness programming, put in place by volunteers, provide evacuees with activities to raise spirits and engage them with human connection and a sense of caring and normalcy in an otherwise stressful situation.

Thanks to the flexibility and welcome of CenterLight and their Site Administrator Maria Provenzano, volunteer and wellness programs were immediately allowed to be put in place at Kings Hotel, reconnecting volunteers who had met residents at the Armory, assisting with meal distribution and caring visits, all of which greatly improved the spirit of evacuees who were relieved to see familiar faces and to know that, even though many do not have family of their own, they are cared for and loved. For this especially vulnerable population, the continued displacement from home, paired with relocation, has been shown to increase the risk of trauma to patients. Referred to in the industry as “transfer trauma” — stress that individuals with dementia experience when changing living environments — dislocation can have serious health effects including depression and anxiety. The presence of wellness programs and volunteers are proven help to relief some of these symptoms and provide the human connection that is so critical at this time. For the last two weeks getting volunteers (who are located much closer to the Armory in Park Slope) to visit Kings Hotel in East New York has been increasingly difficult, and many musicians – who themselves are struggling financially – cannot afford to take car services. To alleviate this, volunteers have been paying for transportation out-of-pocket. 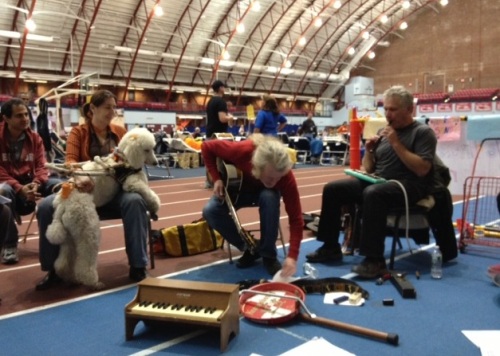 Wellness activities, including arts, music and visits from Willow the service poodle, ease stress the stress and trauma of elderly residents displaced by the storm.

On Monday, Belle Harbor Manor evacuees will again be moved, this time into a facility in Queens Village. Just as Kings Hotel is, the facility is staffed, but extra hands and hearts streamline events like meal times and help make it a relaxing and enjoyable part of their days away from home. We would like to allow volunteers to continue to visit Belle Harbor Manor residents, especially during their transport/transition week beginning Monday, which is very stressful for them. In order to do this, we need help raising money for car services to ferry carfuls of volunteers to and from the location per day from Brooklyn, where all of the volunteers are located. With the holidays approaching your donation is needed more than ever to lend a hand and heart to this forgotten community of wonderful, loving elders in need.

To understand the impact and importance volunteers have had on this population of evacuees, please read a letter (written during one of the writing workshops) posted to the NY Times City Desk from Belle Harbor Manor resident Miriam-Einstein-Drachler, available here.

PLEASE DONATE TO ASSIST IN GETTING VOLUNTEERS RIDES TO ASSIST WITH RESIDENT TRANSITION TO THE NEW FACILITY, WELLNESS PROGRAMS AND FOR CARING VISITS.

To facilitate this, I have created a donation page here.

Thank you, and happy holidays from Belle Harbor Manor and all of the volunteers who have been working with them for the last six weeks!