Hello, world.  It’s me, Kiki.  The one who parodies our popular culture, doesn’t watch television or listen to commercial radio.  I don’t buy InTouch Weekly (but will peek during a pedicure if the NY Times crossword puzzle isn’t nearby) and certainly didn’t mean to make a fuss.  Really.  However I think it’s funny that all this time I fought the label of “burlesque performer” because I already thought that, to describe my work, it is not an entirely accurate pigeon hole.  And here I am making the tabloid news because I am honest-to-God withdrawing from it and moving on to what most of my mentors and close creative genius friends have suggested all along: a one woman show.  To be honest, the concept doesn’t quite grab me.  People might think it is stand up.  And let’s face it, going to see stand up in New York these days, much like many things in this ever-evolving new New York, is just not what it used to be. That just isn’t going to work.

So instead, and based on the uncensored concept that made the Sunday Show such an underground-cum-public success, I am going to reconnect with my unique style of entertaining the public through topical, somewhat controversial performances and observational humor  through a new “One-ish Woman Show”.  I am always inspired by how the way I see the world translates, with the help of spectacle performances, to and before an interested audience.  It’s medicine in a sick and twisted world.  And you’ll see real burlesque (but not from me – the adorable outfits will be staying on from now on!) Admittance will not be selective but instead, limited.

The new year will bring, as usual, more unexpected performance art than you can shake a dollar at.  And speaking of, I’m still not going to charge $1000 to see it (ah-hem, you know you are, venue I’m referring to).   The type of art that people can afford and relate to is what I want to continue to provide in 2011.  I have a fire lit beneath me, and it’s burning off my garter belt.

Perezhilton.com neglected to mention that The Sunday Show had a residency at The Slipper Room on Orchard Street in New York City before it closed.  We are doing the anniversary show at Ella because construction on the new theater is pending.  I, of course, would love to bring something back to the space that James and Camille Habacker created to delight audiences and give performers a space to work out their concepts.  We’ll see how things progress. 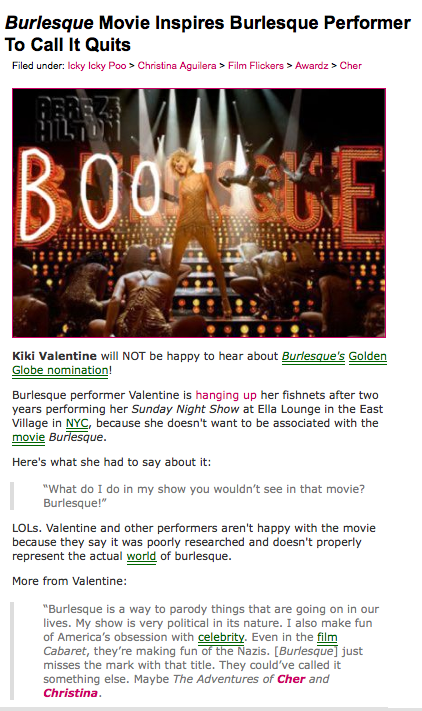 Isn’t this what everyone dreams of? We’re the stars of our own made-for-TV movie.

Want To Help Out The Oil Spill? Donate Your Stockings. Really.

The pictures.  The spill trajectory debates.  The politicians.  The finger-pointing.  The witch hunt.

It all left me thinking “what can WE do to help the cleanup efforts of this, the largest not-so-natural disaster in American history?”

And then I figured it out!

The California-based organization MATTER OF TRUST collects organic fibers which are then used in oil spill containment booms.  According to their website, “We shampoo because hair collects oil. Why should millions of pounds of absorbant, natural, renewable fiber clippings go to waste every day?” Genius.  They also accept pet clippings.  However with the disaster in the Gulf, hair donations have skyrocketed and the group is now in desperate need of nylons – even if they have runs in them.  (Note: if you prefer to donate hair it will go into the group’s “reserves”.)

You can contact me as I will be taking a collection, or this link will provide you with information for registering on your own.  It’s fast and easy, and you’ll feel great making your own simple contribution to the cleanup,  its astronomical damage and the effort it will take over the next decade to remedy this catastrophe.

Tagged hair donations for gulf coast oil spill, Kiki Valentine, matter of trust, oil spill, what can i do to help the oil spill

When I was a little girl I would sit while mom brushed out my long, curly hair. Painful, yes. But nothing is more painful than a too-tight ponytail. Aside from it causing traction alopecia in many women, it pulls your eyes and face. With this in mind, I share with you my disturbing Fashion Week moment: Mena Suvari at Project Runway alum Christian Siriano’s show. The blogosphere is atwitter with talk of new tattoos on her back, however this hairstyle looks especially painful and alien.